In modern Western culture Jesus Christ is largely portrayed and perceived as a milksop – timid, weak, ineffectual, even effeminate. In colloquial terms, this means a wimp, pantywaist, sissy or wuss. You don’t have to look far to find support for this. I recently saw a T-shirt on the internet that blatantly said “Jesus is a ****.” I can’t say the word but it essentially meant “Jesus is a wuss.” Sterile religion and worldly culture has fostered this false image to the point that it’s the general perception of most people, spoken or unspoken. As such, when the average person thinks of Jesus Christ they think of “gentle Jesus meek and mild” rather than the awesome Lion of Judah. I’m not saying that Jesus didn’t have a gentle side, but – please – how about some balance?!

When I was a lost teenager my impression of Jesus Christ wasn’t good. I perceived him as a wimpy doormat when nothing could be further from the truth. I turned to the LORD at the age of 20 and immediately started consuming God’s Word voraciously. Something really blew me away – the spectacular and powerful depictions of both Father God and Jesus Christ, who are One (John 10:30). I was like, “Whoa! Who’s this?” What I saw totally contradicted what religion and culture had taught me.

Simply put, the false image of Jesus Christ is a lie concocted by the enemy to deceive people and prevent them from following the Lord of Lords, particularly men who refuse to follow someone they don’t respect. And it’s impossible to respect a weakly milksop.

Before his incarnation Jesus appeared many times in Old Testament periods; these manifestations are called theophanies, manifestations of God or Christ in the physical realm.

Now when Joshua was near Jericho, he looked up and saw a man standing in front of him with a drawn sword in his hand. Joshua went up to him and asked, “Are you for us or for our enemies?” (14) “Neither,” he replied, “but as commander of the army of the LORD I have come.” Then Joshua fell facedown to the ground in reverence, and asked him, “What message does my Lord have for his servant?” (15) The commander of the LORD’s army replied, “Take off your sandals, for the place where you are standing is holy.” And Joshua did so.

The “commander of the army of the LORD” in this passage is the pre-incarnate Christ. Tell me, does this Commander strike you as a milksop or as a mighty warrior that commands respect and awe? Notice how he responds when Joshua asks him if he’s on Israel’s side or the people of Jericho’s side: “Neither, but as commander of the army of the LORD I have come.” It’s so succinct but it’s potent and speaks volumes: Jesus Christ is so mighty, so great – so incredibly awesome – he’s above the mundane conflicts of this world. Just the same, he’s above the perpetual squabbling of the left-wing and right-wing factions of our governments today.

Other examples of the pre-incarnate Christ in the Old Testament include the “man” Jacob wrestled with (Genesis 32:22-30) and the Angel of the LORD who commissioned Gideon to fight the Midianites (Judges 6:11-16).

Christ during His earthly ministry

When Jesus was on earth and ministered for 3½ years he was brilliant in argumentation (Matthew 22:15-22). He astonished and silenced his enemies (Luke 20:26) to the point that “no one dared ask him anymore questions” (Mark 12:34). Does this sound like an impotent milksop?

Furthermore, Jesus was dynamic – full of energy, power, passion and life. He had aura of pizzazz, not stultifying dullness. Want evidence?

Jesus was incredibly bold, outspoken and had no qualms about offending people who were deserving of correction:

One of the most amazing examples of Jesus’ incredible boldness and power can be seen when he cleared the temple of ungodly fools:

On reaching Jerusalem, Jesus entered the temple area and began driving out those who were buying and selling there. He overturned the tables of the money changers and the benches of those selling doves, (16) and would not allow anyone to carry merchandise through the temple courts. (17) And as he taught them, he said, “Is it not written: ‘My house will be called a house of prayer for all nations, but you have made it a den of robbers.’ ”

(18) The Chief priests and the teachers of the law heard this and began looking for a way to kill him, for they feared him, because the whole crowd was amazed at his teaching.

Notice that Jesus radically threw over tables and benches and would not allow anyone to carry merchandise through the temple courts. Does this sound like “gentle Jesus meek and mild” or the bold Lion of Judah? Can you imagine Jesus not allowing anyone to carry goods into the temple?

Believe it or not, Jesus cleared the temple in this manner twice during his earthly ministry. This account took place near the end of his ministry, but he also cleared the temple near the beginning — three years earlier — as detailed in John 2:13-17. On the earlier occasion he made a whip and utilized it in driving out the animals, yelling and scattering coins! 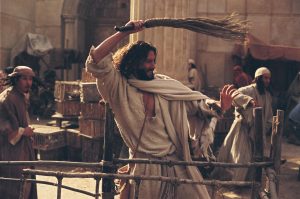 And notice the response of the legalists in Mark 11:18: They feared him! They feared him so much that they decided to kill him and remove him from the scene altogether. Let me tell you something, impotent milksops don’t inspire fear and they certainly don’t provoke VIPs to plot to murder them. Also, notice how the people who witnessed him clear the temple responded: They were amazed! Dull sissies don’t inspire amazement, but people who are dynamic, courageous and authoritative do! (And by “authoritative” I don’t mean authoritarian, which is abusive. ‘Abuse’ is the misuse of power).

What about Jesus’ torturous crucifixion? Any of us who have seen The Passion of the Christ realize that no pansy could face that incredible challenge, let alone endure it.

Although he came to this world as a lamb to be sacrificed he shall return as a mighty warrior, as shown in Revelation 19:11-16. Please check out this passage and you’ll see that the mighty Messiah is anything but a pitiful weakling.

Lamb or Chief Shepherd and Anointed One?

Speaking of being a lamb, Jesus was a sheep only in the sense that he was a sacrificial lamb for the sins of the world (Revelation 13:8). In truth, he was and is “the good shepherd” or “Chief Shepherd” (John 10:11,14 & 1 Peter 5:4), a powerful leader who leads not only by word, but by example and service.

‘Christ’ means “Anointed One” and ‘Christian’ means “little anointed one” or “like the Anointed One.” Hence, Christians are to be like their leader, Jesus Christ.

This certainly means walking in love, kindness, peace, gentleness and humility, but these traits have been emphasized at the expense of Christ’s more dynamic qualities noted above. It goes without saying that the body of Christ needs to cultivate Jesus’ more masculine attributes as well as the softer ones. It’s simply a matter of balance. Christians are sheep in the sense that they follow the “good shepherd” not in the sense that they’re weak pushovers.

Furthermore, followers of the Mighty Lord possess abundant life and dunamis power. ‘Dunamis’ is the Greek word for power, which is where we get the English words dynamic and dynamite. This power is available to every believer but we have to “fan it into flame” (2 Timothy 1:6-7). Tell me, does “abundant life” and “dynamite power” sound boring and weak? No, they’re exciting and explosive and believers will walk in them more and more as they take hold of the eternal life – the life-of-the-age-to-come – to which they’re called (1 Timothy 6:12).

Let me leave you with a passage to chew on:

the righteous are as bold as a lion. 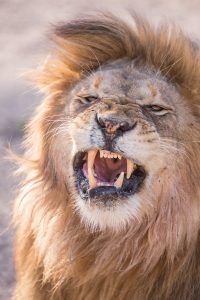 THE Angel of the LORD — Mighty Angel or Pre-Incarnate Christ?

Christ: “The Anointed One” — What Does it Mean? What Does “Jesus” Mean?