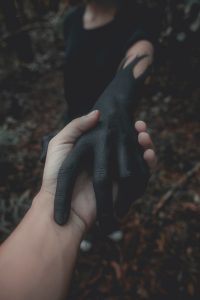 NOTE: This article was written by guest minister Dennis Pollock of Spirit of Grace Ministries.

A friend recently pointed out a particular doctrine she is hearing taught on Christian television quite a bit these days. She was obviously troubled and concerned about this teaching, and wanted to know what I thought. I was intrigued enough to do a little research on the topic, and what I discovered blew me away.

The subject had to do with grace, or rather the exaggerated, inflated, twisted, and stretched-far-beyond-all-Biblical-limits version of it that a number of popular preachers are proclaiming today. It is grace on steroids, grace twisted beyond recognition, grace amplified to such a degree that it bears no resemblance to the grace declared by Jesus, and explained by Paul, Peter, and John.

The hyper-grace doctrine that is popular today is often identified by the catch-phrase: “God forgave all of your sins when you came to Christ: past, present, and future.” Some may feel that this statement is accurate enough. After all, are we not justified through Christ, and regardless of any sins we may commit, don’t we still remain children of God? And if so, does that not imply that even our future sins are forgiven?

But the hyper-grace folks push this further — in fact a whole lot further. They suggest that it is never necessary for a Christian to confess their sins or ask forgiveness of God. After all, they say, God forgave us once and for all when we were saved, and never again will we need to ask forgiveness. If you blow it, and do something extraordinarily stupid or wicked, just go about your business and don’t trouble God about it. The matter is already settled in God’s eyes. The only Christians who ever ask forgiveness or bother to repent of sins are those who are carnal and ignorant of the grace of God. Real Christians never repent, or to paraphrase the theme of the movie Love Story: “Grace means never having to say you’re sorry.”

In order to sustain a theory which is so blatantly contradictory of the Scriptures, the defenders of hyper-grace are forced to resort to all sorts of gyrations of logic, twisting and transforming the plain meaning of enormous chunks of the Bible. They also are forced to essentially throw out the majority of the Scriptures. The Old Testament, for example — the Old Testament is so forcefully anti-sin, with its thunderous demands for repentance, that the hyper-grace preachers are uncomfortable with it.

To solve this problem they simply insist that the Old Testament has virtually no relevance for us today. One of them has even written a book explaining why the God of the Old Testament is most definitely not the God of the New Testament. So if you really want to be one of their disciples, you can start with tearing the Old Testament out of your Bible, and paying no heed to it ever again. But they don’t stop there. They don’t really like the teachings of Jesus much either. Now I know that sounds hard to believe, and they certainly won’t put it in those terms, but it is the truth. They will insist that most of the teachings of Jesus you read in the gospel accounts were for the Jews of His day. They dismiss the entire Sermon on the Mount. In their minds the Sermon on the Mount was “law” and not grace, and therefore we have no obligation to keep any of those commands, and probably ought not to read it, lest we end up moving away from grace and back to the law.

Forget about turning the other cheek, pay no attention to doing your charitable deeds privately, erase from your memory Jesus’ insistence to love and forgive your enemies, to be a peacemaker, to avoid lusting after women, to pray secretly in our rooms, to lay up treasures in heaven, to trust our heavenly Father to provide for us, to seek first God’s kingdom, to enter by the narrow gate, or to do our Father’s will lest He tell us in the last day that He never knew us. All of these things were written for

Jesus’ generation only, according to this bizarre and absurd theory, and have no relation to the grace-Christian today.

Of all that Jesus said in the Sermon on the Mount, the thing that is most galling to the hyper-grace proclaimers is Jesus’ command for us to ask the Father to forgive our trespasses as we forgive those who trespass against us. In their minds this surely demonstrates that this sermon is not for us. There is no need for us to ask forgiveness for trespasses — in fact God never even sees our little moral boo-boos.

Of course the Sermon on the Mount is only the tip of the iceberg. As you read through the Gospels you find Jesus saying all sorts of things about sin and repentance and so forth. And so these well-meaning, deluded folks have decided that it is safer to simply say that nearly everything Jesus said before dying on the cross was for Jews and has nothing to do with the grace life. So, while you are tearing pages out of your Bible, you will need to go to the accounts of Jesus dying on the Cross — and everything to the left of that must go! It has nothing to do with you.

The idea that when God looks at a Christian He only sees Jesus has been around for a long time, and there is some truth to that — in a legal sense. Legally we are indeed the righteousness of God in Christ. We have been given the gift of righteousness and God accepts us on that basis. If this is what is meant by “God only sees Jesus when He looks at me,” — well and good.

But if by that you mean that the Creator of Heaven and Earth is incapable of observing your sins, faults, and foolishness, and has no clue what you have been up to as you have engaged in all sorts of mischief — you are living in a dream world. The Bible tells us that “All things are naked and open to the eyes of Him to whom we must give account” (Hebrews 4:13). This warning is given in a letter clearly written to believers, not an evangelistic sermon presented to the ungodly. If God cannot see our sins, mistakes, and follies, how could He possibly discipline us? And yet the Bible unequivocally declares that “. . . whom the LORD loves He chastens, and scourges every son whom He receives.”

Any person who has been in Christ for some time and has never felt the chastening hand of God is suspect. In fact the Scriptures tell us, “But if you are without chastening, of which all have become partakers, then you are illegitimate and not sons” (Hebrews 12:8). Without question our holy God sees us, and hears our words, knows our thoughts, observes our actions, and finds some pleasing and others distinctly displeasing. The apostle Paul declared, “Therefore we make it our aim, whether present or absent, to be well pleasing to Him” (2 Corinthians 5:9). If Paul made it his aim to please God, he must have been convinced that it would be possible to live in such a way that you displeased God.

Those espousing this teaching hate the idea of repentance. And if they mention it at all, they will suggest that repentance merely means changing your mind, but has nothing to do with feeling bad for your sins (something Christians should never do) and certainly never hints at changing your behavior. Repentance is for sinners (maybe — although some go so far as saying that even sinners have no need of repentance: only believe) but it is surely never for Christians.

It is astonishing to me that anyone could make and believe such a statement. In the second and third chapters of the Book of Revelation, Jesus addresses the churches — and He breaks nearly every rule and contradicts nearly every tenet of this monstrously anti-Biblical teaching. To one church He threatens to remove their lampstand unless they repent — but then I guess Jesus never read the hyper-grace manual. To another He threatens rebellious church members with sickness and death. And to the church at Laodicea He says:

. . . you say, “I am rich, and have become wealthy, and have need of nothing,” and you do not know that you are wretched and miserable and poor and blind and naked . . .

And then He has the audacity to tell them “Therefore be zealous and repent.” Somehow Jesus missed the memo which instructs preachers to declare to Christians that God never sees their sins, that there is no need to ask forgiveness for sins, and that God is pleased with His children all the time! Not only do these preachers hate the idea of repentance; they even pronounce that God can never even get angry with the nations, as He did in those old law-based days. The preeminent hyper-grace TV preacher wrote:

I have also heard some believers pronouncing: “If God does not judge America for all its sins, God has to apologize to Sodom and Gomorrah.” Well, let me say this with honor and respect: If God judges America today, He has to apologize to Jesus and what He has accomplished on the cross!

So God has been so neutralized, made so morally feeble and blind, so “wimpified” that He is unable to discern the wickedness of the nations today, and if He does somehow observe a little bit of their wickedness, He would never dare punish them for it. This same preacher is unwilling to admit that we should ever confess our sins to God, despite the verse which states: “If we confess our sins God is faithful and just to forgive us our sins and to cleanse us from all unrighteousness” (1 John 1:9). To try to escape the obvious meaning of the verse, he insists that this was written to the Gnostics rather than believers! How strange that John used the pronoun “we!”

This doctrine is so saturated with absurdity and the refutation of everything the apostles, the prophets, and the great reformers and revivalists of the church have always believed and preached, it would take a huge volume to cover it all. That there are preachers who have strayed from the truth is not all that surprising. There have always been strange and bizarre doctrines that surfaced in the church in every generation. The thing that is especially troublesome concerning this doctrine and our generation is the fact that so many Christians seem to be swallowing it, no questions asked or suspicions raised. How is it that millions can follow these teachers and believe every word that comes from their deluded hearts and deceitful mouths?

The only possible answer is that many Christians today are not Bible readers. With all our Christian bookstores and our multiple versions of Bibles available, with all our Bible software and scores of Bible commentaries, few Christians seem to have developed the habit of actually sitting down quietly for fifteen or more minutes a day and actually reading the Bible. We often would rather hear what someone has to say about the Bible than to read the Bible for ourselves.

May our gracious God and His Son, our Lord and Savior Jesus Christ, lead us back to the Scriptures where we may learn the ways of our God. For when God’s people are Biblically well-informed, heresies like this one will not thrive.

Libertinism — What’s Wrong with It and How to Walk FREE