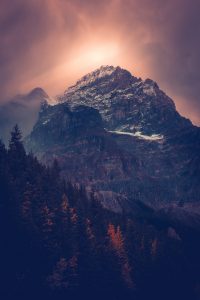 Some believers get close to the dangerous cliffs on either side but, thankfully, they don’t fall off, at least not yet. These are believers who flirt with legalism and libertinism and are therefore infected to some degree. Their flirtations are risky, but they’re still on the mountain. They can’t go any higher because the sides are so steep and dangerous. If they attempt to climb from that position they’ll fall off. The only way they can go higher is to move away from the sides, which represents repentance from legalism or libertinism, depending on which side they’re on.

The believers who wisely avoid both sides are free to go up the mountain closer and closer to the heart of God. Some may get to a certain level and decide they want to stay for one reason or another. Some of these may eventually stray to one edge or the other, even falling off. Those who keep going higher do so because they want to and the path is easy and enjoyable. Jesus said his yoke is easy and his burden is light (Matthew 11:28-30). Trying to move up on the edges, by contrast, is dangerous and very hard work, not to mention utterly fruitless.

The truths conveyed in this parable were understood by Solomon, the wisest man of his day:

Do not be overrighteous, neither be overwise—why destroy yourself? 17 Do not be overwicked and do not be a fool—why die before your time? 18 It is good to grasp the one and not let go of the other. The man who fears God will avoid all extremes.

To be “overrighteous” or “overwise” refers to legalism whereas being “overwicked” or a “fool” refers to libertinism. Both are corrupt conditions and should be avoided at all costs. Solomon says “it is good to grasp one and not let go of the other,” which indicates that the truth is somewhere in between the two.

Legalism and libertinism are like the opposing sides of a counterfeit coin. Both sides are equally bad and the coin needs tossed out altogether.

Carol (my wife) shared an interesting variation: She took a quarter and showed how it lies flat when it rests on one side or the other. The only way the coin can rise is by standing on its edge, which is the “middle ground” between heads or tails. She then illustrated that the coin can only be spun when it’s in this position, to which she spun it. The coin spun round n’ round and looked like it was having a blast!

Likewise there’s no genuine joy with legalism or libertinism. The former pleases religious pride while engaging the flesh in secret whereas the latter openly pleases the lusts of the flesh. In short, they both spring from the sinful nature and therefore can only please that nature (1 John 2:16). Any satisfaction experienced is shallow. Underneath is death, which is what the flesh produces.

The Parable of the Prodigal Son

Jesus continued: “There was a man who had two sons. 12 The younger one said to his father, ‘Father, give me my share of the estate.’ So he divided his property between them.

13 “Not long after that, the younger son got together all he had, set off for a distant country and there squandered his wealth in wild living. 14 After he had spent everything, there was a severe famine in that whole country, and he began to be in need. 15 So he went and hired himself out to a citizen of that country, who sent him to his fields to feed pigs. 16 He longed to fill his stomach with the pods that the pigs were eating, but no one gave him anything.

17 “When he came to his senses, he said, ‘How many of my father’s hired men have food to spare, and here I am starving to death! 18 I will set out and go back to my father and say to him: Father, I have sinned against heaven and against you. 19 I am no longer worthy to be called your son; make me like one of your hired men.’ 20 So he got up and went to his father.

“But while he was still a long way off, his father saw him and was filled with compassion for him; he ran to his son, threw his arms around him and kissed him.

21 “The son said to him, ‘Father, I have sinned against heaven and against you. I am no longer worthy to be called your son.’

22 “But the father said to his servants, ‘Quick! Bring the best robe and put it on him. Put a ring on his finger and sandals on his feet. 23 Bring the fattened calf and kill it. Let’s have a feast and celebrate. 24 For this son of mine was dead and is alive; he was lost and is found.’ So they began to celebrate.

25 “Meanwhile, the older son was in the field. When he came near the house, he heard music and dancing. 26 So he called one of the servants and asked him what was going on. 27 ‘Your brother has come,’ he replied, ‘and your father has killed the fattened calf because he has him back safe and sound.’

28 “The older brother became angry and refused to go in. So his father went out and pleaded with him. 29 But he answered his father, ‘Look! All these years I’ve been slaving for you and never disobeyed your orders. Yet you never gave me even a young goat so I could celebrate with my friends. 30But when this son of yours who has squandered your property with prostitutes comes home, you kill the fattened calf for him!’

31 “ ‘My son,’ the father said, ‘you are always with me, and everything I have is yours. 32 But we had to celebrate and be glad, because this brother of yours was dead and is alive again; he was lost and is found.’ ”

The younger son is an obvious type of carnal license. He disregards his father’s will and indulges in sinful excess, which fails to bring him happiness. He ends up destitute and even “starving to death” (verse 17), which illustrates that “the wages of sin is death.”

The good news is that this prodigal son ultimately realizes his error and repents. He genuinely humbles himself and goes back to his father. This shows that, while he was guilty of licentiousness, he wasn’t so stubborn and stupid that he would rather die than give up his folly. In other words, he wasn’t a dyed-in-the-wool libertine even though he functioned in that capacity for a season.

The father represents Father God, of course, and we observe his grace flowing to the humble. Indeed, the father literally runs to his repentant son, hugs him, kisses him and gives him the best apparel to don. He then throws a big party with loud music and joyous dancing. Surely “God gives his grace to the humble”! This is how our heavenly Father reacts when one of his children comes back to him after a season of folly.

But the older son doesn’t share his father’s joy (verses 25-30). Why? Because he’s a legalist and this is a common trait of the disease of legalism. In fact, he gets angry! Can you believe it? His only brother has been missing for years* and when he finally has the sense to return he gets mad about it? This is absurd, but that’s what legalism does to people. It’s like when the Pharisees got angry at Jesus’ mere intention of healing a man’s shriveled hand on the Sabbath (Mark 3:1-6). Can you imagine being so clueless and deceived to the point of opposing a miraculous healing of God? No wonder Christ shot them a look of anger—he was righteously incensed by their stubbornness and idiocy.

* Verse 29 implies that he was gone for years.

Another indication of the older son’s legalism can be seen in his works-orientation rather than relationship-orientation. He was so focused on toiling in the fields that the celebration started without him, which indicates that the partyers didn’t even invite him! He evidently wasn’t known for being a fun guy; hardcore legalists never are. When he finally discovers that his brother had returned he explodes and complains that he’s been “slaving” for his father for years.

We know that the older brother didn’t have a close relationship with his father for three reasons:

As you can see, neither son had the heart of their father. Both veered to opposite extremes, which are equally wrong. The younger son gave himself over to lawlessness for many years but, thankfully, had the sense to realize his error and repent. The older brother, on the other hand, gave himself over to legalism. He put on the airs of obedience, but he never knew the father and therefore didn’t have his heart of love, freedom and joy.

Both lawlessness and legalism are extremes that must be avoided in favor of knowing the Father, which is the key to spirituality. Spirituality—in turn—is the key to godliness and true freedom.

Spirituality — How to be Spirit-Controlled Rather than Flesh-Ruled

Legalism — Understanding its Many Forms

Libertinism — What’s Wrong with It and How to Walk FREE